Calcium carbide is a flammable and explosive material. China's annual export volume of calcium carbide is more than 3 million barrels. In the domestic and foreign ports, there have been explosions due to unqualified packaging, causing huge economic losses to the country. Doing a good job in the identification of dangerous materials for calcium carbide steel drums is of vital importance to safeguarding the image of China's export commodities, avoiding economic losses to the country, and eliminating insecurity.

I. Analysis of the reasons for failure

The use of calcium carbide steel drums is mainly identified in the field for appearance and airtight seals.

The unqualified conditions often appear in the appearance appraisal are the rough surface of the barrel cover and the serious deformation of the top of the barrel. The rough surface of the paint is mainly caused by the fact that the calcium carbide scattered on the surface is differentiated into powder in the air when the calcium carbide is contained, and it is not cleaned up in time when the paint is painted. This problem is relatively easy to solve. The main reason for the deformation of the top of the barrel is caused by excessive nitrogen pressure during negative pressure nitrogen charging. The key to solving this problem is to ensure that the pressure is not more than 30 kPa. When the pressure in the barrel reaches the required level and is constant, the nitrogen filling should be stopped immediately. This requires the workers to master the nitrogen pressure during operation, and cannot be operated by experience alone.

The unqualified conditions in the identification of gas seals are more complicated, and they are summarized as follows;

(1) The air hole leaks. The main reason is that the sealing gasket material has poor elasticity, insufficient thickness and poor uniformity. Secondly, when the nitrogen filling is completed, the force is too large when the screw is tightened, causing the sealing gasket to tear and causing air leakage.

(2) Air leakage at the curling and sealing parts. There are three main reasons for the air leakage: First, the sealing packing is not fully stirred evenly, the coating is uneven, the embedding of the particles causes gaps when crimping; secondly, the sealing machine wears for a long time, and the sealing wheel is increased. The sealing effect is deteriorated; the third is that the action is too large when the sealing operation is performed, and the force is too strong, so that the sealing is uneven, resulting in air leakage.

Second, the countermeasures should be taken to solve the above problems

(1) The quality of the steel drum is the key to solving the problem of air leakage. The production equipment of the steel drum production enterprise should meet the requirements of the quality of the dangerous package. The steel drum should be at least 5 layers, and the 7 layers should be the best. The sealing filler used should be uniform and strong, and the weld should not have sand holes. When loading and unloading steel drums, it should be operated in a civilized manner. The buckets should not be recessed due to falling or impact, especially in the T-shaped joints.

(2) When installing the calcium carbide for sealing, the operator should carefully operate, and the sealing speed should not be too fast, to avoid leakage of the lid due to uneven force. When the sealing wheel is large, it should be adjusted in time, and if necessary, replace the sealing wheel. . Workers in the sealing operation position should be relatively fixed, and they should not change their posts frequently. The newly-employed workers should undergo strict training and be skilled before they can be employed.

(3) The nitrogen in the barrel should be carried out after the calcium carbide is cooled to room temperature. Generally, the nitrogen is filled twice. After the first nitrogen filling, the gas seal is detected by barrel, and the leaked steel drum is removed, and then there is no leakage. The gas steel drum is filled with nitrogen, which can ensure the nitrogen content and sealing tightly. The pressure should be constant when filling nitrogen, and the pressure should not be too high to avoid deformation of the lid. Do not use excessive force when tightening the bolt after filling with nitrogen to avoid tearing the gasket.

(4) The warehouse where the calcium carbide is stored shall be flat and clean, and shall not have any debris such as stones, iron blocks or bolts. Forklift operation should be light and light, carefully driving, avoiding the fork hitting the wall of the calcium carbide barrel, causing nitrogen leakage. Before the barrel cover is painted, the dust and calcium carbide powder should be cleaned and painted to keep the appearance clean.

(5) The identification of the dangerous package of the calcium carbide steel drum should be carried out after one week of nitrogen filling. According to the previous experience, the steel drum with the collapsed barrel lid is selected for the gas sealing port identification. The steel drum of the drum cover micro-drum is generally tightly sealed. . The soap liquid used in the identification of the gas seal is rich in foam. When the pressure reaches the required value, it is constant for more than 3 minutes. Carefully observe whether there is air leakage, and carefully observe whether the pressure gauge pointer is down. If there is a drop, further observe the bottom of the bucket. Air leaks in the barrel, T-junction and weld. The appraisers should concentrate on avoiding interference and careful operation to ensure the safe transportation of the exported calcium carbide. 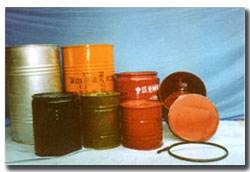